Free Shipping on orders over $50 (except Fish) 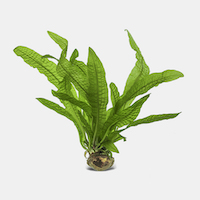 MACRONUTRIENTS. Macronutrients are those that plants need in large quantities, including calcium, hydrogen, carbon, nitrogen, phosphorus, potassium, magnesium, oxygen and sulphur. Fortunately, many of these macronutrients are plentiful and easily available.  We will cover them individually at greater length immediately below.

OXYGEN. Oxygen is vital to the plant’s growth. This is one of the macronutrients, however, that is usually plentiful in an aquarium. Aquarium plants absorb oxygen through their roots and from respiration. They use it during photosynthesis to essentially process carbon and other nutrients. While plants need oxygen, they don’t need it in high quantities. In fact, too much dissolved oxygen in aquarium water can be problematic as it may negatively impact plants’ ability to absorb other nutrients (especially iron). And, during the day, plants produce oxygen as a byproduct of photosynthesis so the lack of oxygen during the day will almost never be a problem in an aquarium. 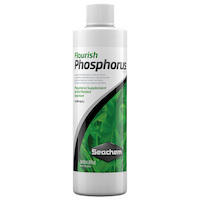 Really, the only time when the levels of oxygen may drop to dangerous levels is during the night when both aquarium plants and other tank inhabitants like fish use oxygen. But this potential problem is easily solvable. If you think your aquarium water is not well oxygenated then just agitate the water surface or add an air stone to your fish tank. 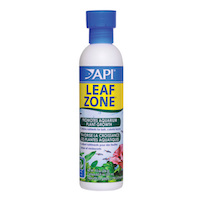 PHOSPHORUS. Phosphorus is also important to maintaining plants health and growth. Phosphorus is especially important to proper root development in aquatic plants as well as flowers. Phosphorus is typically absorbed by the plant through the roots in the form of phosphates. Phosphates, on the other hand, are generally present in sufficient quantities in aquariums. They’re are found in large quantities in fish food. In fact, fish overfeeding will lead to over abundance of phosphates which, in turn, will result in algae blooms. 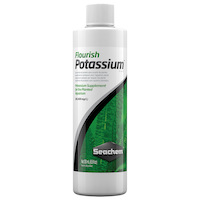 POTASSIUM. You should neither confuse nor ignore Potassium. It is crucially important in a planted aquarium as it strengthens the plant, aids it in photosynthesis and root development, among other things. Unlike phosphorus, potassium is absorbed by plants from the water column. Some nutrient rich gravels May also leach it to the water. But, it is likely that you will need to add potassium to your aquarium water in order to ensure its availability to your aquarium plants. Fortunately, there are liquid fertilizers like Seachem Potassium that easily solve this issue. 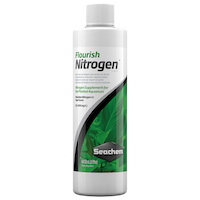 NITROGEN. Nitrogen is absolutely necessary macronutrient for robust and healthy plant growth. In an aquarium, plants get nitrogen in the form of nitrates or ammonium. Generally speaking, most aquarium plants prefer to take up nitrogen in the form of ammonium. That is actually good news to fishkeepers because ammonium is produced by fish waste and the decaying of other organic matter. By removing ammonium from the aquarium water, which can be converted to very toxic ammonia, aquarium plants act like a filter safeguarding the well-being of all tank inhabitants. The plants will also take up nitrates - source of nitrogen that is usually more abundant in an aquarium environment - which also can become toxic to fish at high concentration levels. Certain levels of nitrates - at about 20 ppm - in a planted tank are actually desirable as a source of nitrogen for aquarium plants. But, keep in mind, that higher levels of nitrates may result in algae and, even more importantly, may cause stress and negative health effects in fish. 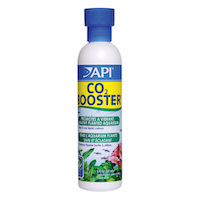 CARBON. Carbon is very important to aquarium plants. It literally makes up almost half of the plant’s mass. Plants obtain carbon from CO2 through the process of photosynthesis by breaking up CO2 into oxygen and carbon. CO2 is always present in aquarium water but not always in sufficient quantities. The source of CO2 in an aquarium is decaying organic matter and fish waste and when fish or other tank inhabitants respire. Some aquariums will have sufficient amounts of CO2 but many will not. Importantly, the most limiting factor for the plant’s growth in an aquarium is lack of sufficient amount of CO2. Therefore, it may be necessary to inject CO2 into the aquarium water to promote healthy growth of aquarium plants. You can either inject CO2 using pressurized CO2 system or liquid fertilizers such Seachem Flourish Excel or API CO2 Booster Supplement. 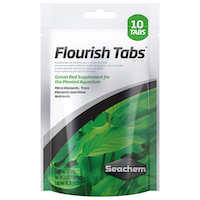 CALCIUM. While calcium is important to the plant’s development, it usually is present in sufficient quantities in aquarium water. Unless you have a very soft water or are using reverse osmosis water, you should not worry much about calcium.

MAGNESIUM. The last macronutrient, but still important, that we will discuss is magnesium. It plays an important role in many important functions including activating number of enzymes that form fats, oils and starch. The level of magnesium varies depending on your water source. Generally speaking, the harder the water the more magnesium will be present in it. Anyway, many liquid fertilizers contain magnesium as well as planted aquarium substrates.

In Part II of this series about feeding your aquarium plants, we’ll cover micronutrients and their importance to a healthy plant development.