Corydoras catfish belong to the Callichthyidae family of fishes. They should be considered a must-have scavenger fish for every aquarium. Corydoras are found in Central and South America. They range from Panama to Argentina. There are nearly 200 species; many are not scientifically described yet and only bear a classification number preceded by capital C. Many Corydoras are widely available in the aquarium trade and are very popular.

They’re popular among experienced and beginner enthusiasts alike because they’re small, friendly fish with peaceful dispositions that do well in community aquariums. They are well suited for life in a planted aquarium as well. Live aquarium plants will provide these fish with lots of hiding and resting places. There is nothing more mesmerizing than watching a group of Corydoras swimming among Anubias leaves or stems of Cryptocoryne Wendtii, scavenging for food. As they will not harm any plants, no special considerations are necessary when housing plants and corys together.

Corydoras are very active during the daytime and can be observed swimming back and forth and across the aquarium for extended periods, looking and scavenging for bits and pieces of leftover food. It is this behavior that makes these fish so beneficial to any aquarium. By scavenging for food, they keep the aquarium free of debris, preventing a buildup of decaying matter. 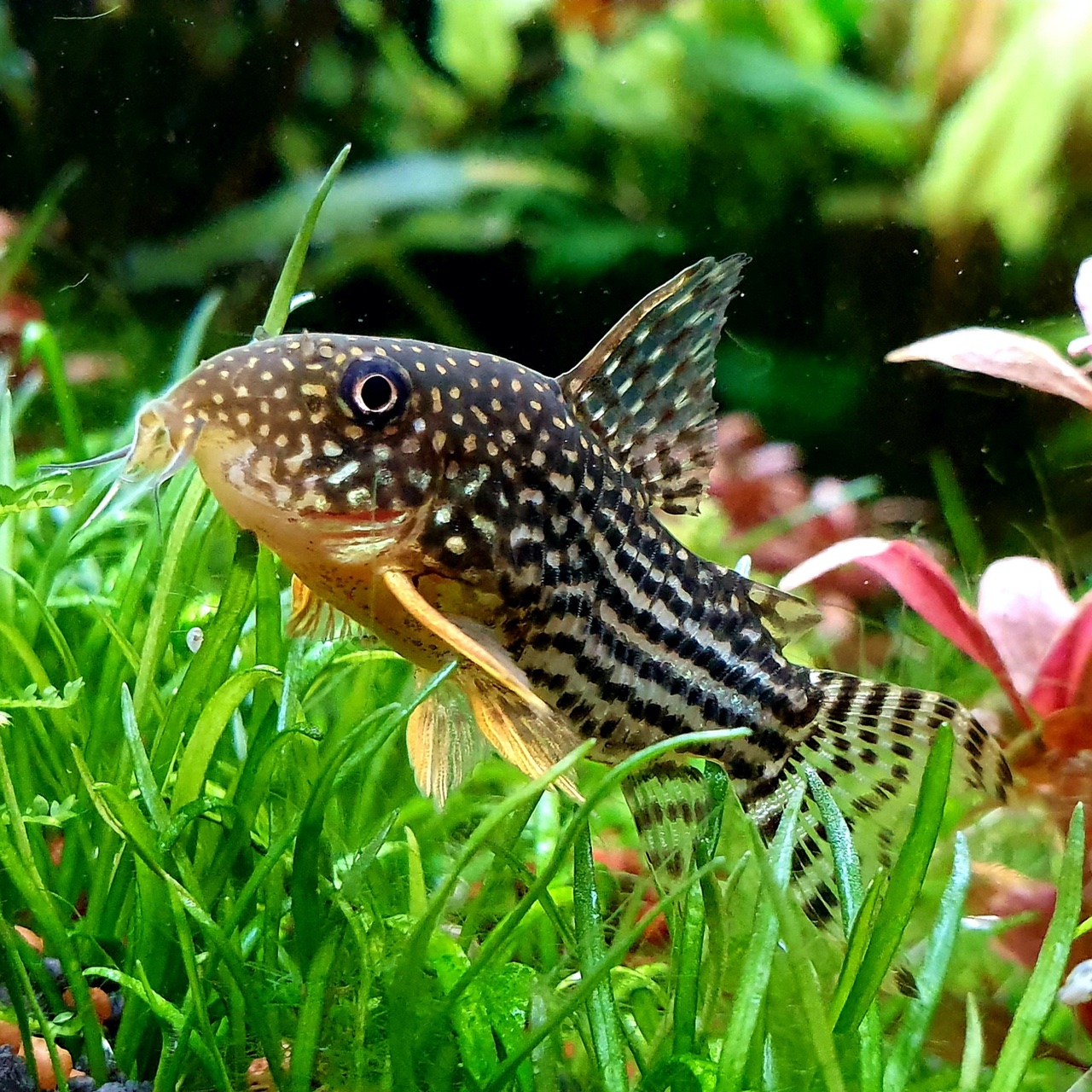 From time to time, they will also dash to the water's surface and gulp air to supplement the oxygen extracted by their gills. Corydoras adapted to live in rivers and streams with limited oxygen content and developed a way of breathing air directly in addition through their gills. When they gulp the air from the water's surface, they store it in a special pocket in their gut and they absorb it into their bloodstream.

Corydoras look for food using their barbels. They have six barbels around their mouth. The barbels are touch-sensitive and allow the fish to “feel” for food among gravel, in the sand, and around obstructions such as rocks or driftwood.

All Corydoras species should be kept in groups, preferably of the same kind. Only when kept in groups, these fish will feel safe and secure and exhibit their natural behavior. Corydoras are omnivores and will eat flakes, sinking pellets, and small aquatic invertebrates such as cyclops, tubifex, and daphnia.

Sexing Corydoras might be difficult but females appear to have fuller and more round bodies than males. They are not difficult to breed if provided with good conditions. Furnishing their aquariums with plants, and botanicals such as catappa leaves, maoni pods, coconut caves, and sandy or soft substrate are recommended. They may even spawn in a community aquarium although any eggs would likely be eaten by the parents of other fish. After spawning, either the fish or eggs should be removed to a separate aquarium. Eggs hatch in about 48 hours and the young fry can be fed newly hatched Artemia (baby brine shrimp) and later on daphnia and crumbled flake foods. 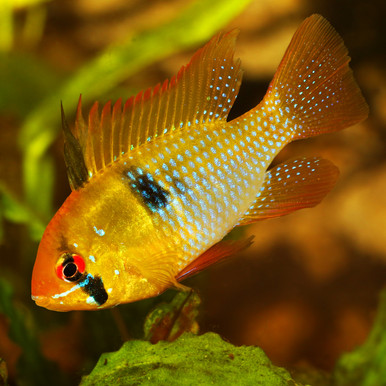 There are many Corydoras species available in the hobby. Below are our top picks for Corydoras catfish for your aquarium:

Super Eques Cory is a rare fish and is highly sought after in the aquarium hobby because it is extraordinarily beautiful. Its body is almost metallic/emerald green with an intense orange band along its gills and back. A group of these corys is guaranteed to make a lasting visual impact in any aquarium. 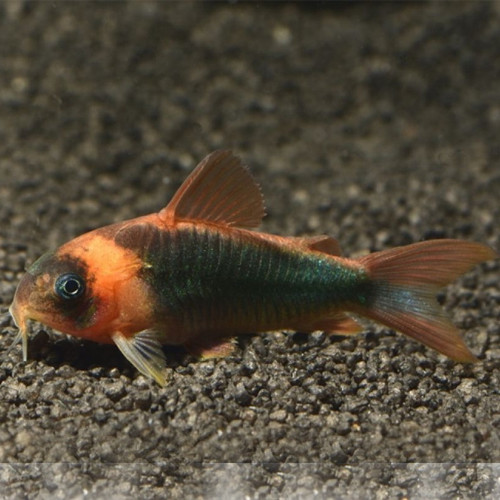 Super Eques Corys originate from the Amazon River in Brazil. Together with other cory catfish, they belong to the genius Callichthyidae and subfamily Corydoradinae. Super Eques Corys are peaceful and very social and should be kept in groups. They can be kept in a wide range of aquarium conditions, including mixed community aquariums.

This fish will look their best, and exhibit the most interesting behavior, in aquariums with hiding places provided by aquarium plants, botanicals, driftwood, and rocks. There should also be some open areas in the aquarium, allowing the fish to swim together in groups. They are very active fish and constantly swim back and forth, foraging for food.

Venezuela Cory is a naturally occurring variant of the Bronze Cory. This cory's body displays warm golden brown to orange hues and colors. This beautiful, peaceful, and schooling fish is a perfect addition to any community fish aquarium. 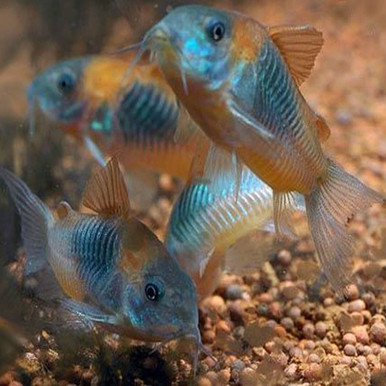 Ideal aquariums for this fish would be well-planted, with open swimming areas, and small gravel. Adding driftwood, rocks, and other aquarium decorations would make this cory feel safer, allowing it to exhibit its natural behavior. This cory, like most others, is very active throughout the day constantly foraging for food and providing visual interest to your aquarium.

Black Venezuela Cory is a relatively rare and highly sought-after cory. Its popularity is understandable as the fish's black body coloration with lighter/reddish colored fins and flanks is truly unique and makes this fish stand out above many others.

Black Venezuela Corydoras is a small, social, and peaceful fish that must be kept in a group. This fish is very social and needs other corys to feel safe and secure. Keeping this cory in a group will add to its well-being and allow it to display its natural behavior. And, Black Venezuela Cory's natural behavior is very entertaining as the fish will keep very "busy" for most of the day, looking for food all over the aquarium.

Black Venezuela Cory will accept a wide range of foods, including commercially prepared flakes, pellets as well as frozen food like bloodworms or frozen brine shrimp. Ideal aquarium conditions would include driftwood, botanicals such as Cattapa leaves, or other tank decorations. Aquarium plants are also highly recommended. Water chemistry is not critical and the fish will do very well in most aquariums. 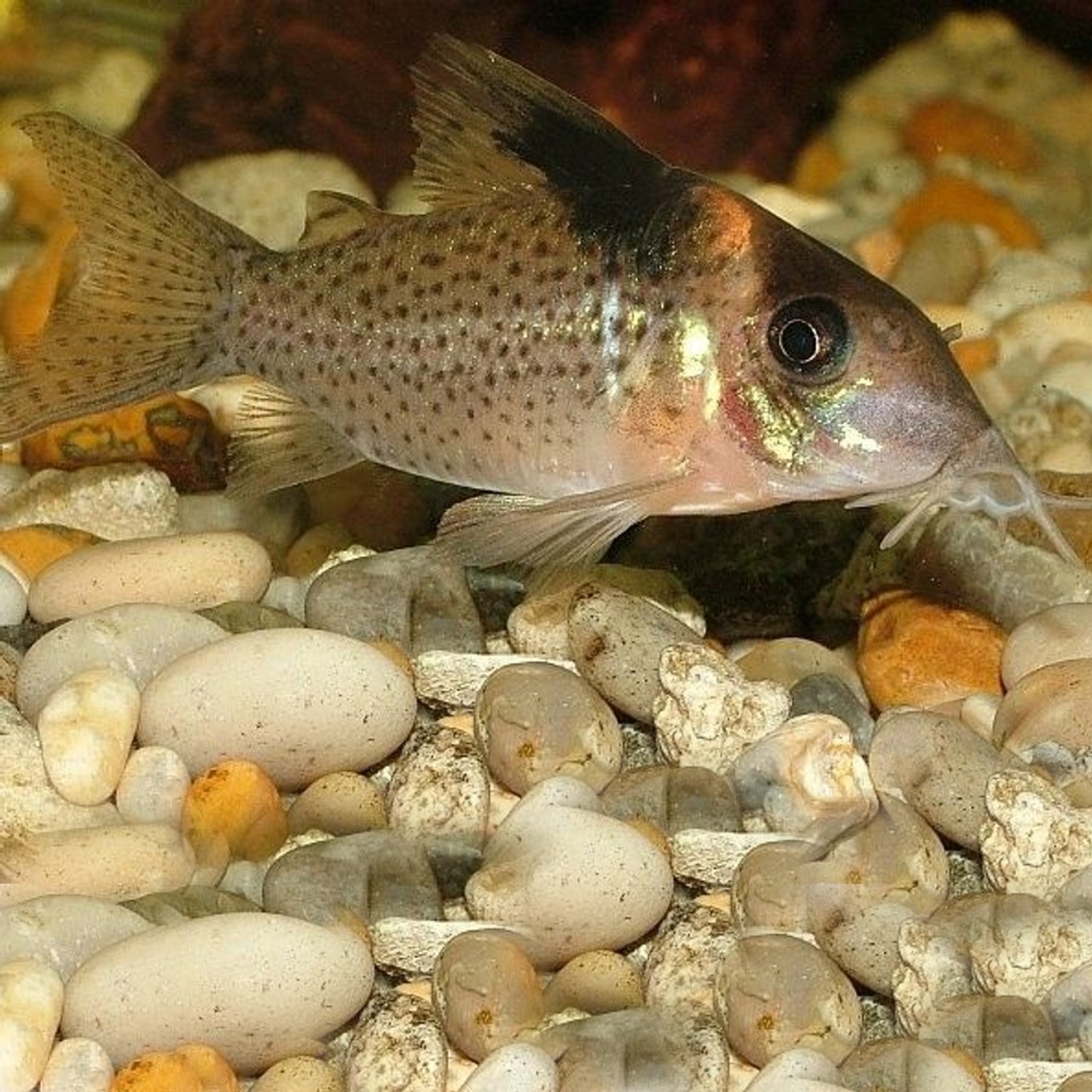 Spotted Cory, Corydoras melanistus, are typically found in the Essequibo River, Guyana. They can be kept in a wide range of aquarium conditions and are ideal for mixed community aquariums because of their small size and friendly disposition.

Their aquarium habitat should include sandy-like gravel, live aquarium plants, some manzanita branches, driftwood, and rocks. Adding some botanicals such as catappa leaves or maoni pods would complete their habitat. Aquariums should also have some open areas where they can swim together in groups. Spotted Corys are very social and should be kept in groups of six, and preferably more. They are very active fish and will constantly swim back and forth, providing never-ending entertainment.

Green Aeneus Cory, also known as Bronze Cory, is one of the most popular fish in the hobby. There are several naturally occurring color forms. Most specimens are golden green with hues of golden brown present on top of their bodies.

Green Aeneus Cory inhabits small streams, tributaries, and shallow coastal areas of rivers in Bolivia, Brazil, Colombia, Ecuador, Peru, and Venezuela. They are peaceful, social fish, living in groups of several individuals, and relatively undemanding. In fact, a large group of corys is a sight to behold. Water chemistry is not critical and they can be kept in a wide range of aquarium conditions. They can be kept with other community aquarium fish because of their small size and friendly disposition.